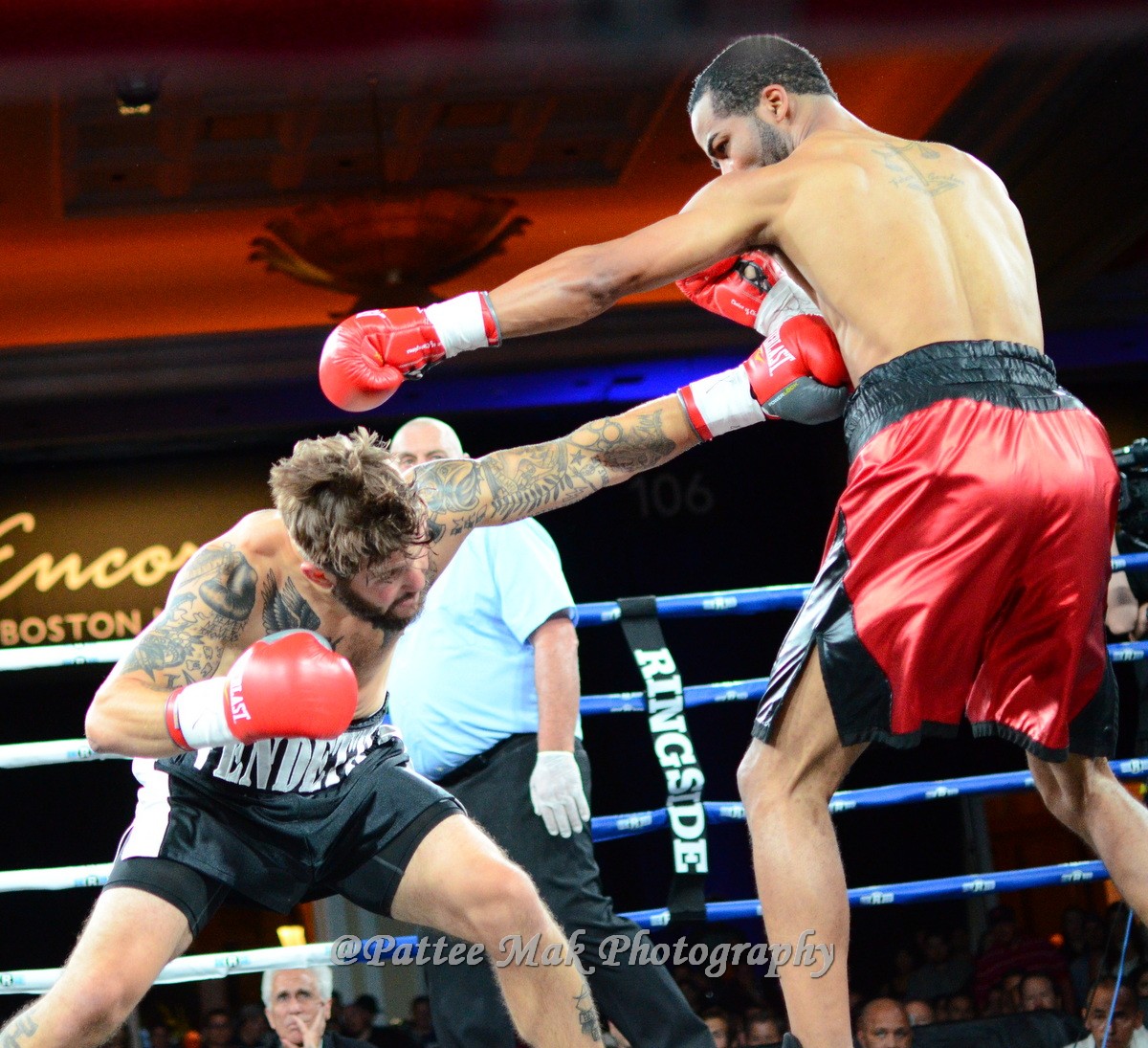 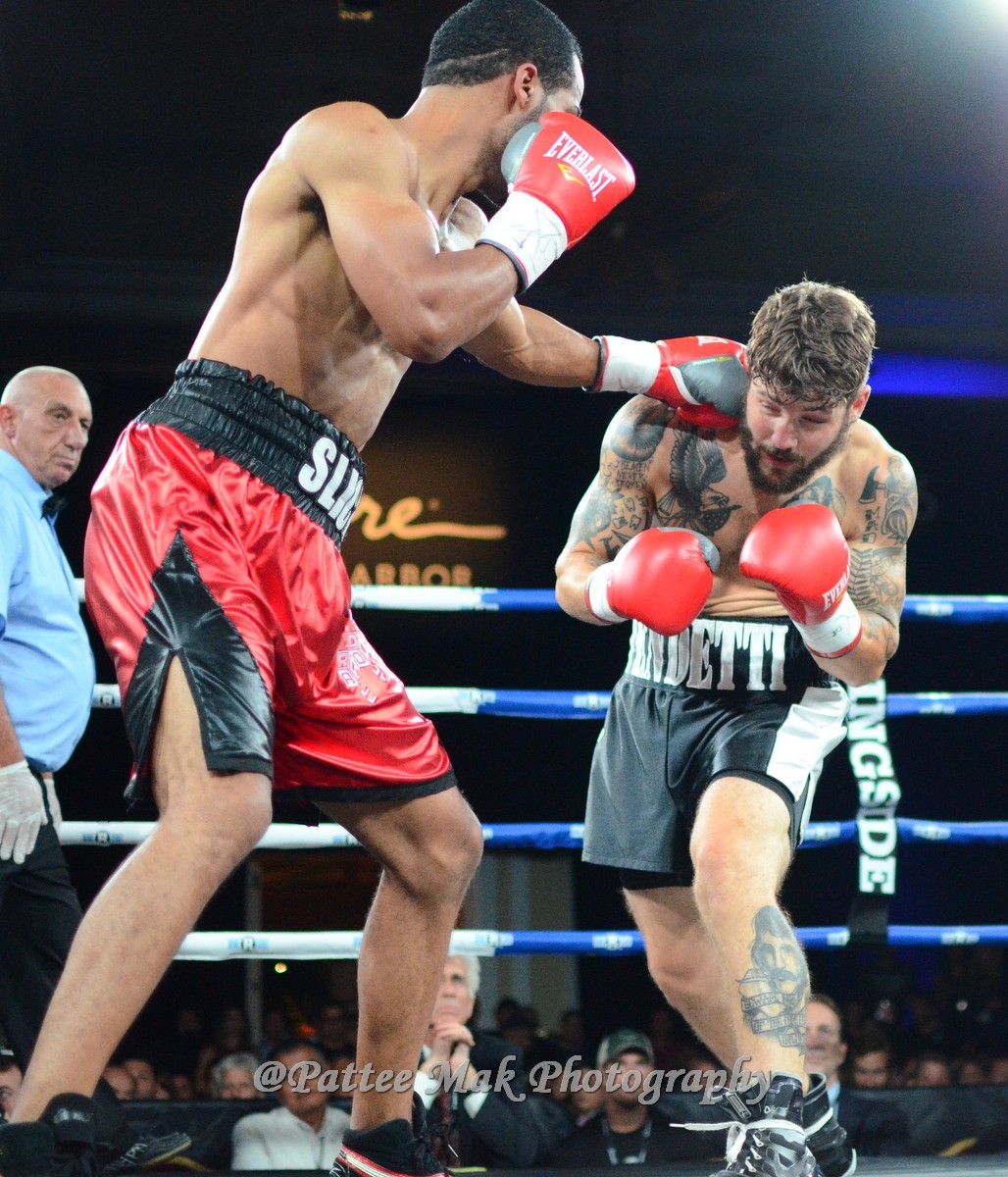 Entering the ring to "The Imperial March" aka Darth Vader's theme song, Vendetti took a cue from the Sith Lord and began a non stop pressure onslaught that Anderson had no answer for at any point in the 12 round fight.

'The Villain' continually backed Anderson to the ropes and unleashed a steady torrent of combinations averaging close to 100 punches per round. Vendetti never slowed down, putting on a near flawless performance that saw a bloody and swollen Anderson hold on desperately throughout the fight.

Vendetti's performance was so dominant that one judge gave him two 10-8 rounds despite no knockdowns in the fight for a final scorecard tally of 120-108 x2 and 120-106.

The Stoneham, Massachusetts native was his usual blunt self in his post fight interview to the delight of the chanting crowd.

"I just love to fight.", said the new IBA Junior Middleweight Champion who is considering a move down to welterweight.

Whether it's in the main event of a sold out ballroom for a title or whether I'm alone in a room with another man and two rusty machetes. It's all the same to me. It's a fight. I'm ready to die in there and that's what makes the difference."

"This was probably one of Vendetti's best performances. Look at the scorecards. 120-106 is something you don't see too often.", said Murphys Boxing founder and Vendetti's promoter, Ken Casey.

"He's just relentless. He's constantly coming forward. Then he's the type of kid that when he's done throwing punches in bunches, he gets on the mic and says all the right things. He's really turning into a star in the area. Sold out venue. Main event. Fighting 12 rounds. Doesn't phase him at all. The better the competition is, the more rounds he goes, the more pressure he's under, the better he seems to be. We're looking to get him back in the ring as soon as possible."

In the 6 round junior welterweight co-main event Venezuelan Olympian and recent Murphys Boxing signee, Luis Arcon Diaz (8-0, 8 KOs) dominated Argentina's Mario Lozano (18-4-1, 9 KOs) before scoring a brutal knockout in third round. In what was supposed to Diaz's toughest fight to date, the 27 year old's speed and power overwhelmed his opponent from the get go finally stopping him with a face first on the canvas highlight reel knockout.

Dublin's Lawrence Fryers (11-1, 4 KOs), who was set to face Ray Moylette in a highly anticipated all Irish junior welterweight showdown until visa issues earlier this week left Moylette unable to enter the United States, suffered a major scare in the first round before stopping last minute replacement Bryan Abraham (6-34-1, 6 KOs) by second knockout. Seconds into the fight Abraham caught Fryers with a massive overhand right sending him to the canvas. Fryers beat the count on shaky legs and Abraham charged in and dropped Fryers to his knees for a second knockdown. The heavy handed veteran tried to finish off the New York based Irishman but somehow he survived the onslaught. Clearing his head between rounds, Fryers roared out of the corner at the start of the second and fired off a straight right that badly hurt Abraham who froze and slumped over the ropes, causing the referee to wave off the contest to the roar of the sold out crowd.

In a surprising upset, Carlos Hernandez (4-3-1, 2 KOs) handed local favorite Mike Ohan Jr. (9-1, 5 KOs) his first loss by way of majority decision with scores of 57-57, 58-56 and 59-55. In an incredibly close contest that could have went either way, Hernandez didn't let the partisan crowd or Ohan Jr.'s undefeated record intimidate him and the Connecticut welterweight fought a gutsy toe to toe performance that earned him a razor thin victory in the 6 round welterweight bout.

Boston based amateur standout, James Perella (4-0, 3 KOs) went the distance for the first time in his young career winning a shutout unanimous decision over crafty MMA veteran, Bryan Goldsby (5-12) with identical scores of 40-35 x3. The popular young welterweight is off to a fast and furious start having 4 fights in only 4 months and against the elusive Goldsby got in some much needed rounds of professional experience.

Soft spoken South Boston favorite, Joe Farina (7-1, 4 KOs) continued his busy 2019 in ring campaign picking up his third win of the year over the near 25 year veteran Jose Angel Ortiz (5-14-1, 2 KOs) with a 4 round unanimous decision in the welterweight division with scores of 39-36 x2 and 40-35. Farina kept Ortiz on the ropes for virtually the entire fight and dropped Ortiz once in the third round.

Opening up the event, Belgium's Antoine Vanackere (11-1, 6 KOs) made his American debut a successful one, dropping and stopping the always game Mexican veteran, Francisco Medel (13-20, 8 KOs) in the third round of a scheduled 6 round junior welterweight bout.

The phenomenal turn out of 2,300 people, with hundreds more turned away at the door, was enough for Murphys Boxing and Encore Boston Harbor to announce at the end of the night an immediate return event on August 23rd.

"It was a very special night.", explained Casey after the show.

"To be the first ever ticketed event at a brand new resort casino that hasn't even been open for month and to sell the place out with a local fighter in the main event, was an amazing experience and a historic night. We want to keep the momentum going and we'll be back next month with another stacked card. We're thankful to everyone who supported the event tonight. Boston is truly becoming one of the hotbeds of boxing in the United States and with Encore, Murphys Boxing now has the perfect venue to showcase that."